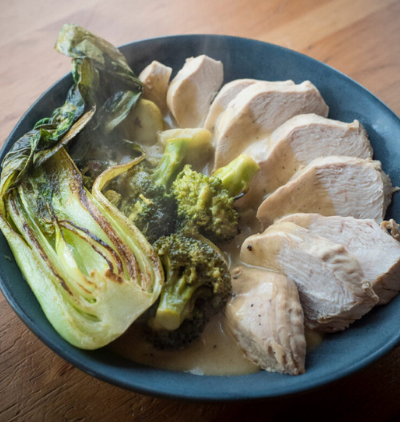 In medium pot, heat up oil and add the chopped onion, roughly chopped and not peeled ginger, turmeric and crushed garlic.

Let them all colour, and then add lime juice and remaining of the 1/2 whole lime, thyme, salt & pepper and stock (can be chicken or veggie – we used leftover artichoke stock we make for the previous recipe).

Bring to a boil, add breasts. Ensure they are covered by the water. Cover and reduce heat to a simmer for 25-30 minutes. Internal temperature should be 75 celsius.

Remove from heat and reserve on the side in the broth. They won’t overcook.

In a blender add all ingredients for the sauce, minus broccoli and boy choy. Blend at high speed for a couple of minutes.

In a large pan heat up 1 tablespoon oil, add broccoli florets and cook for 5 minutes. Deglaze with a small ladle of the chicken cooking broth, bring to the boil and then add coconut and lime cream, bring back to the boil. Then reduce heat to low/medium and keep simmering. Stir regularly as sauce will thicken.

In a separate pan, heat up 1 tablespoon oil, and once pan is really hot, add bok choy, cut in half. Cook until golden, flip on the other side and cook until golden too. Deglaze with a few drops of lime juice (squeeze the leftover half lime very hard), add salt and pepper.

Remove breasts from the broth. Slice chicken, serve with broccoli and coconut cream. Add half bok choy. Enjoy on its own or with grains such as rice, quinoa, barley or freekeh.